The Pharaohs of Ancient Egypt
King List and Timeline
Part 1

For pharaohs of the New Kingdom,
1550 BC and later see:
Pharaoh List Page 2 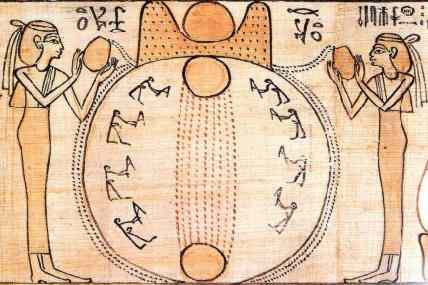 Egyptian Creation.
The Sun is shown in the Underworld twice,
and on the horizon.
Papyrus of Khensumose.

The Egyptians began their chronology with an ancient high culture they called "Zep Tepi", that existed about 35,000 BC and was ruled by ten gods. Then came six dynasties of lesser gods and nine dynasties of demigods who ruled Egypt for tens of thousands of years.

The Shemsu Hor - the Companions of Horus - Humans, now, then ruled, followed by the rule of spirits and two groups of presumed mythical kings (heroes), whose rule ended as the known pre-dynastic culture began.


The series of names in the lists was probably not arranged thus until a late age, perhaps the XlXth dynasty. In early times there is no sign of a definite and systematic chronology. The list given by the Memphite school, in the most complete form is as follows:

Excerpted from: A History Of Egypt,
From the Earliest Times to the XVIth Dynasty,
by William Mathew Flinders Petrie, London, 1897.

Conventional archaeology ignores all this. They have found simple herders and vilagers inhabited the valley of the Nile beginning about 5500 BC in distinctive phases called the Badarian, Amratian (Naqada I), and Gerzean (Naqada II) periods. The Nile delta, with its' deep layer of silt, has many stories yet to tell.

It should be noted that dates are approximate and that there is disagreement among experts about much of this material. Spelling of Egyptian names is not standardized, some alternative versions are given.

The Archaic period includes the Early Dynastic Period (Pre-Dynastic, or Dynasty 0), and the First and Second Dynasties. This period marks a consolidation of power generally into two kingdoms, Lower (North) Egypt and Upper (South) Egypt. These were first ruled as separate kingdoms, and maintained their identity to some extent throughout Egyptian history. In 3050 BC the two kingdoms were united into a single nation.

Lower (Northern) Egypt, known as the Black Land, (for it's rich soil), consisted of Memphis (near modern Cairo) and the Nile Delta. (The Nile flows northward.) The following list is all uncertain.

Upper (Sothern) Egypt, known as the Red Land, (for it's desert hills) consisted of the southern Nile, generally to the first cataract at Philae. The cataract is a rough, fast moving section of the Nile that was as far south as boats could go without portage around the rapids.
Many more rulers are of uncertain existence:

The system of "Dynasties" is based on the groupings provided by Manetho in his book "Aegyptaica" (Egyptian history) written about 300 BC. The system generally, but not exclusively, follows bloodlines. This system of grouping kings does not appear to have been in use in early Egypt. Dates in Egypt were computed from the (ritual) beginning of each Pharaoh's rule. Often clay wine stoppers, which record the year of vintage, provide the best record of how long a king ruled. The First Dynasty reigned from c.3050 BC to 2890 BC, their capital was at Abydos (Thnis).

The Old Kingdom is the Third Dynasty through the Sixth, (2630 - 2151 BC), when Egypt attained its first peak of civilization (the first of three so-called "Kingdom" periods which mark the high points of art and architecture in the Nile Valley).

The Fourth Dynasty ruled from 2613 to 2498 BC and included the Pharaohs who built the famous Giza Pyramids: Khufu (Cheops), Khafre (Chephren) and Menkaura (Mycerinus). The people of Egypt in the fourth dynasty cut, moved, raised, placed and squared twenty million tons of stone to build their pyramids and associated temples, plazas and causeways. Today we would need a half million full size diesel trucks to move all that stone. Lined up, those trucks would reach half-way around the world. And they did all this without iron.

The Old Kingdom was followed by a period of economic and cultural decline referred to by Egyptologists as the First Intermediate Period -- or, as the Egyptians called it, the "first illness."

Egyptian central government rapidly collapsed after the death of Pepi II. He had reigned for 94 years, longer than any monarch in history, and died aged 100. The latter years of his reign were marked by inefficiency.

The Union of the Two Kingdoms fell apart and regional leaders had to cope with famine.

Around 2160 BC, a new line of Pharaohs tried to reunite Lower (North) Egypt from their capital in Herakleopolis Magna. In the meantime, however, a rival line based at Thebes, was reuniting Upper Egypt and a clash between the two rival dynasties was inevitable.

Pharaohs of the Seventh and Eighth Dynasties had short reigns between 2181 to 2160 BC. (This table is based on the King List in the Temple of Seti I, in Abydos)

The Tenth Dynasty was a local group that held sway over Upper Egypt that ruled from 2130 to 2040 BC.

Around 2055 BC, a descendant of the Pharaoh Intef III defeated the Herakleopolitan pharaohs, reunited the Two Lands, founded the Eleventh Dynasty and ruled as Mentuhotep II, the first pharaoh of the Middle Kingdom.

The Eleventh Dynasty was a local group with roots in Lower Egypt that ruled from 2134 to 1991 BC.

The Middle Kingdom
In addition to the Twelfth Dynasty, some scholars include the Eleventh, Thirteenth and Fourteenth Dynasties in the Middle Kingdom. The Middle Kingdom was a time of expansion of foreign trade. Wealth from this trade eventually led to an invasion by the Hyksos.

The Twelfth Dynasty ruled from 1991 to 1802 BC, and was considered by later Egyptians as their greatest age.

The Second Intermediate Period is a period of disarray between the end of the Middle Kingdom, and the start of the New Kingdom.

The Thirteenth Dynasty was much weaker than the Twelfth Dynasty, and was unable to hold onto the land of Egypt. The provincial ruling family in Xois, located in the marshes of the western Delta, broke away from the central authority to form the Fourteenth Dynasty.

The Hyksos made their first appearance during the reign of Sobekhotep IV, and around 1720 BC took control of the town of Avaris (the modern Tell ed-Dab'a/Khata'na). The Eastern Hyksos, led by Salitis, the founder of the Fifteenth Dynasty, overran Egypt during the reign of Dudimose I (little wonder, that.). They are counted as Pharaohs of the Fifteenth and Sixteenth Dynasties.

Around the time Memphis fell to the Hyksos, the native Egyptian ruling house in Thebes declared its independence and set itself up as the Seventeenth Dynasty. The several dynasties of the second intermediate period sometimes ruled in different areas at the same time.

The Thirteenth Dynasty (following the Turin King List) ruled from 1803 to around 1649 BC and lasted 153 or 154 Yrs according to Manetho. About 70 Pharaohs ruled during this period.

the position of the following kings is uncertain

The Fourteenth Dynasty was a local group from the eastern Delta, based at Xois (Avaris), that ruled from around 1705 to around 1690 BC.

The Turin King List provides an additional 25 names, some fragmentary, and no dates. None are attested to elsewhere, and all are of very dubious provenance.

The Fifteenth Dynasty arose from among the Hyskos people: desert Bedouins who emerged out of modern Iraq or Syria to establish governance over the northern Nile region, and then the entire kingdom, intending to eliminate the Egyptians. Josephus mistakenly believed them to be Hebrews. The Fifteenth Dynasty ruled from 1674 to 1535 BC.

Alternate Fifteenth Dynasty
according to Manetho

The Sixteenth Dynasty was a local group based on the north coast of the Sinai (Pelusium) and ruled from 1663 to around 1555 BC. They are called Shepherds and may be descended from the Hyksos.

Some sources include as many as six more names - Semqen, Khauserre, Seket, Ahetepre, Amu, and Nebkhepeshre (Apepi III) - who are not attested elsewhere. This group seems to have disappeared entirely by 1555 BC.

The Abydos Dynasty is theorized to have been a series of kings that ruled the area around Abydos and Thinis, north of Thebes from 1650 to 1600 BC. The Turin King list has 16 entries in this position, unfortunately that part of the list is fragmentary and most of the names are missing.
Abydos was at this time a small kingdom pressed between Thebes in the South and the aggressive Hyksos invaders to the North. Four kings are known from archaeological finds at Abydos. It is possible these duplicate other listed kings of the 13th dynasty:

The Seventeenth Dynasty in Upper (Southern) Egypt was centered in Thebes and ruled from 1650 to 1550 BC: