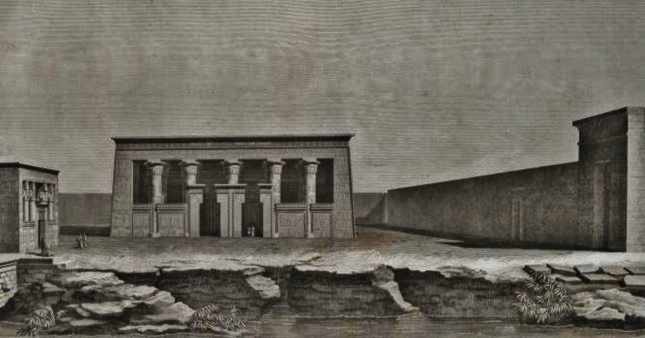 The unique double entrance of Kom Ombo
The small Isis Temple is at the left.
re-creation from La Description de l'Egypte, 1809.

Located 30 miles north of Aswan, Kom Ombo gained importance in the late, Ptolemaic period although worship of the crocodile there dates back to the New Kingdom or before.

The temple at Kom Ombo is the only known temple of ancient Egypt with two main entrances, side by side. The temple duplicates functions on both sides. The southern portion was dedicated to the crocodile-headed god Sobek (Sebek), connected to fertility and to the primordial moon god Khonsu.

The northern half was dedicated to the falcon god Horus, bringer of light and truth. It was said the Pharaoh was the god Horus on earth, after death the Pharaoh became Osiris in the sky.

To the ancient Egyptians symbolism drove every aspect of religion. However, when the Kom Ombo temple was built, around 180 BC, Egypt had lost much of its' tradition. It is possible the design of Kom Ombo was merely a political compromise, but it also is possible that there was an important purpose to Kom Ombo, built as it was in a neglected corner of the Egyptian empire. Sobek and Horus represent far different aspects of Egyptian spirituality. Perhaps unifying them at this place was a powerful achievement. 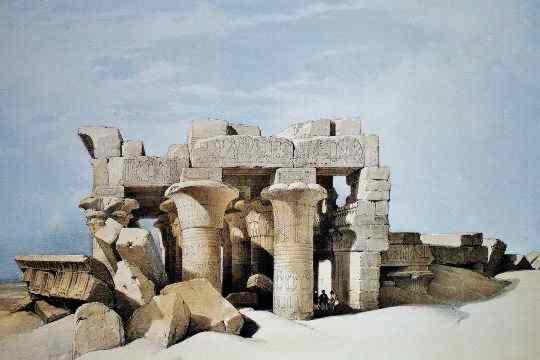 Of Hawks and Crocs

Excerpted from The Spell of Egypt
by Robert Hichens,
published 1911, The Century Co., New York.
Etext prepared by Dagny and John Bickers.

Egypt is, after all, mainly a great river with strips on each side of cultivated land, flat, green, not very varied. River, green plains, yellow plains, pink, brown, steel-grey, or pale-yellow mountains. Always there is light around you, and you are bathing in it, and nearly always, if you are living, as I was, on the water, there are a multitude of mingling sounds floating, floating to your ears.

As there are two lines of green land, two lines of mountains, following the course of the Nile; so are there two lines of human voices that cease their calling and their singing only as you draw near to Nubia. For then, with the green land, they fade away, and amber and ruddy sands creep downward to the Nile.

And the air seems subtly changing, and the light perhaps growing a little harder. And you are aware of other regions unlike those you are leaving, more African, more fierce, less suave, less like a dreaming. And especially the silence makes a great impression on you.

But before you enter this silence, between the amber and ruddy walls that will lead you on to Nubia, high up on a terrace, looking over a great bend of the river is Kom Ombo. And Kom Ombo is the temple of the crocodile god. 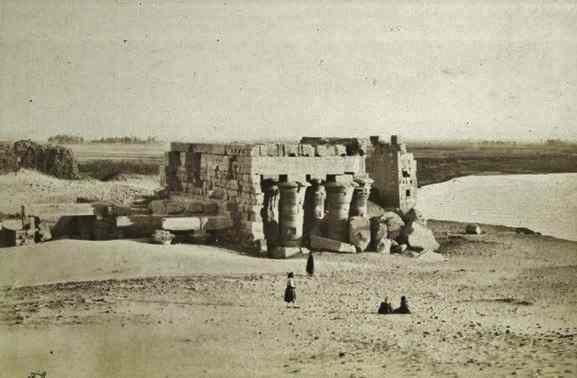 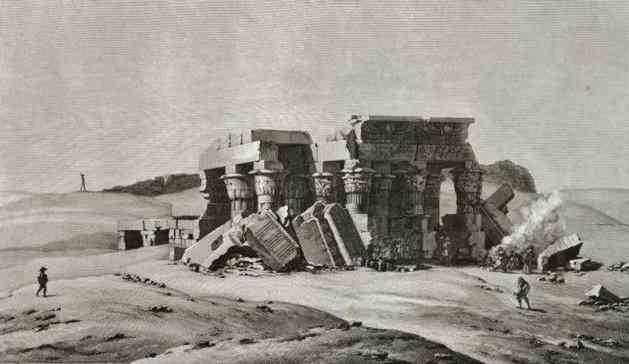 Sobek was one of the oldest of the Egyptian gods. In the Fayum he was worshipped, and there, in the holy lake of his temple, were numbers of holy crocodiles, which Strabo tells us were decorated with jewels like pretty women.

The crocodile god has a noble temple at Kom Ombo, a temple which dates from the times of the Ptolemies, though there was a temple in earlier days which has now disappeared. Its situation is splendid. It stands high above the Nile, and close to the river, on a terrace which has recently been constructed to save it from the encroachments of the water.

Kom Ombos looks down upon a view which is exquisite in the clear light of early morning. Opposite there is a flood of verdure and of trees going to mountains, a spit of sand where is an inlet of the river, with a crowd of native boats, perhaps waiting for a wind. On the left is the big bend of the Nile, singularly beautiful, almost voluptuous in form, and girdled with a radiant green of crops, with palm-trees, and again the distant hills. Sebek was well advised to have his temple here.

At the guardian's gate by which you go in there sits not a watch dog, nor yet a crocodile, but a watch cat, small, but very determined, and very attentive to its duties, and neatly carved in stone. You try to look like a crocodile-worshiper. It is deceived, and lets you pass. And you are alone with the growing morning and Kom Ombos.

The oldest thing at Kom Ombos is a gateway of sandstone placed there by Thothmes III as a tribute to Sobek. The great temple is of a warm- brown color, a very rich and particularly beautiful brown, that soothes and almost comforts the eyes that have been for many days boldly assaulted by the sun. 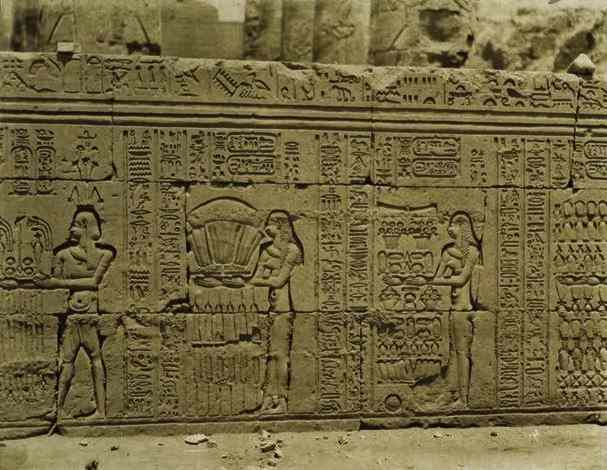 Offerings. From the temple wall of Kom Ombo
Photograph by Antinio Beato, 1860.

Upon the terrace platform above the river is a low and ruined wall, on which there are some lively reliefs.

Immediately before you the temple towers up, very gigantic, very majestic, with a stone pavement, walls on which still remain some traces of paintings, and really grand columns, enormous in size and in good formation. There are fine architraves, and some bits of roofing, but the greater part is open to the air. Nearby is a large, open court containing a quantity of stunted, once big columns standing on big bases. 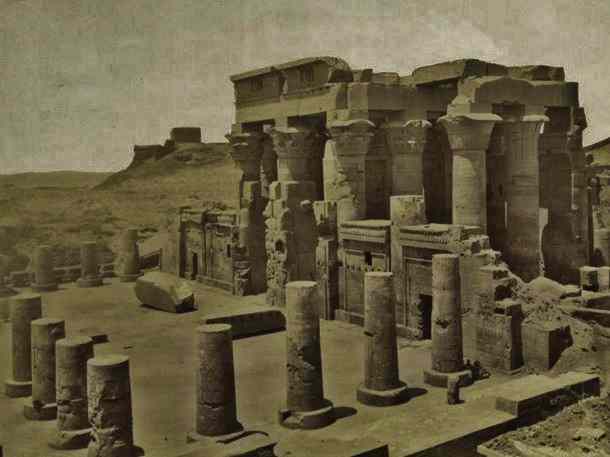 Through a doorway is a second hall containing columns much less noble, and beyond this one walks in ruin, among crumbled or partly destroyed chambers, broken statues, become mere slabs of granite and fallen blocks of stone. At the end is a wall, with a pavement bordering it, and a row of chambers that look like monkish cells, closed by small doors.

At Kom Ombos there are two sanctuaries, one dedicated to Sobek, the other to Heru-ur, or Haroeris, a form of Horus in Egyptian called "the Elder" which was worshipped with Sobek here. Each of them contains a pedestal of granite upon which once rested a sacred bark bearing an image of the deity. 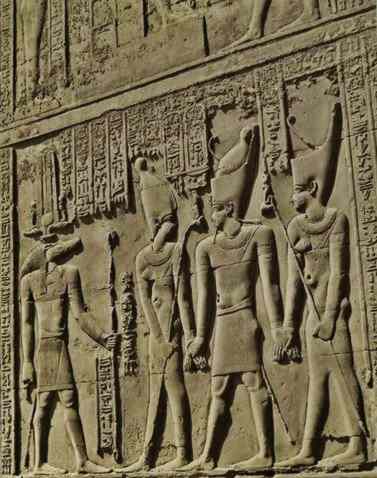 Sobek, Pharaoh and goddesses of north and south Egypt
Photograph by Antinio Beato, 1860.

There are some fine reliefs scattered through these mighty ruins, showing Sobek with the head of a crocodile, Heru-ur with the head of a hawk so characteristic of Horus, and one strange animal which has no fewer than four heads, apparently meant for the heads of lions. One relief which I specially noticed for its life, its charming vivacity, and its almost amusing fidelity to details unchanged to-day, depicts a number of ducks in full flight near a mass of lotus-flowers. 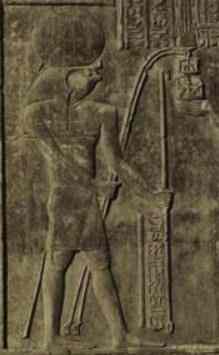 But Horus was not the god of crocodiles, but a god of the sun. And his power to inspire men must have been vast. And we all worship as yet in the dark, as in the exquisite dark-like faith of the Holy of Holies of Horus.

Excerpted from The Spell of Egypt
by Robert Hichens, published 1911.
Back to FIRST CHAPTER 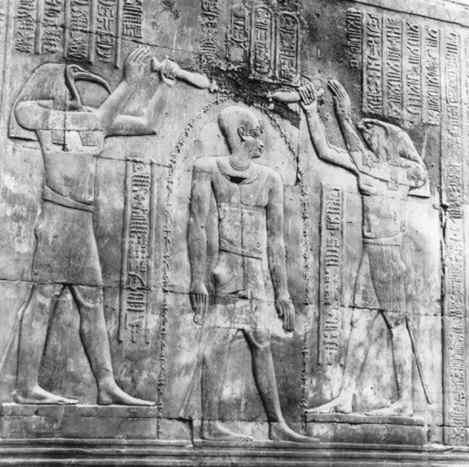 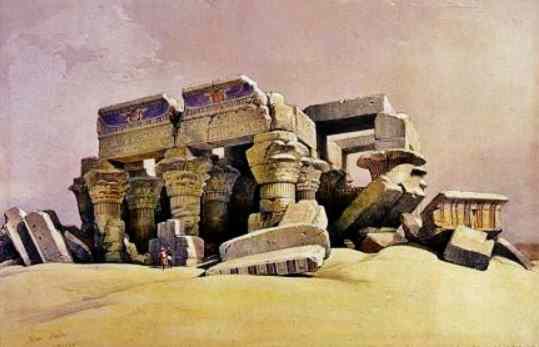 Small Temple of Isis at Kom Ombo
by Vivant Denon 1808 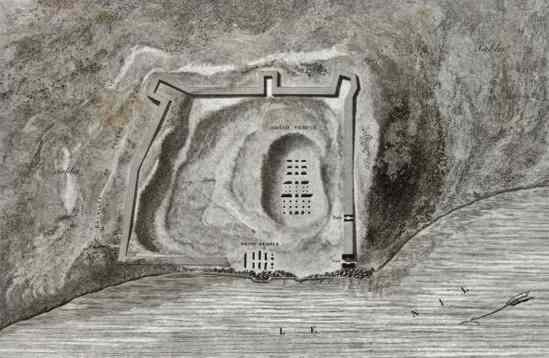