The Egyptian
Book of the Dead

The Egyptian Book of the Dead
Excerpted and edited from
The Wisdom of the Egyptians
published in 1923.


The Book of the Dead, (the Book of the Imy-Duat), the Egyptian title of which, "Pert em hru," has been variously translated "coming forth by day" and the "manifestation day," is a great body of religious compositions for the use of the dead in the other world. It is probable that the name had a significance for the Egyptians which is incapable of being rendered in any modern language, and is borne out by another of its titles--"The chapter of making perfect the Khu"--or spirit. 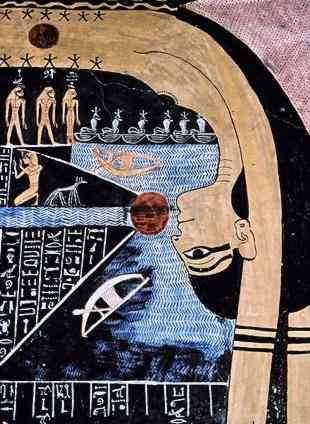 Nut, the sky goddess, swallows the sun in the evening.
Ceiling of the burial chamber, Tomb of Ramesses IV,
photograph by Hans Bernhard, CreativeCommons.

The oldest form of the Book of the Dead known to us is represented in the Pyramid Texts. With the invention of mummification a more complete funerary ritual arose, based on the hope that such ceremonies as it imposed would ensure the corpse against corruption, preserve it forever, and introduce it to a beatified existence among the gods.

Almost immediately prior to the dynastic era a great stimulus appears to have been given to the cult of Osiris throughout Egypt. He had now become the god of the dead par excellence, and his dogma taught that from the preserved corpse would spring a beautiful astral body, the future home of the spirit of the deceased. It therefore became necessary to adopt measures of the greatest precaution for the preservation of human remains.

Many of the texts comprised in the "'Book of the Dead" are in one form or another of much greater antiquity than the period of Mena (Menes), the first historical king of Egypt. Indeed, from internal evidence it is possible to show that many of these were revised or edited long before the copies known to us were made. Sometimes the professional writers who transcribed the ancient texts appear to have been so puzzled by their contents that they hardly understood their purport. Dr. Budge states: "We are in any case justified in estimating the earliest form of the work to be contemporaneous with the foundation of the civilization which we call 'Egyptian' in the Valley of the Nile." 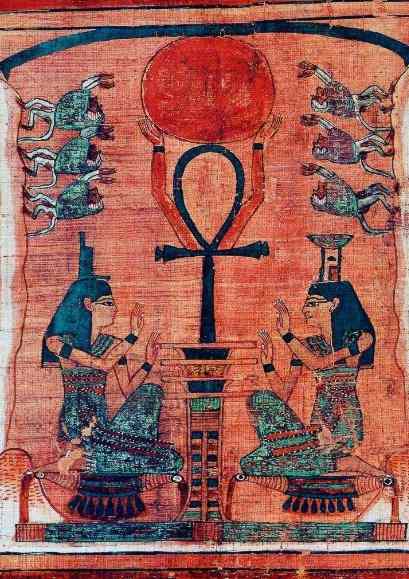 Sun, Ank, and Djed, with goddesses and baboons.
Papyrus of Ani. Photograph from the British Museum.

A Discovery Thousands of Years Old

The mind reels before the idea of a tradition which, during comparatively unlettered centuries, could have conserved a religious formula almost unimpaired. For thirty centuries the Book of the Dead was regarded as essential for use in the next world, as it, over time, became ever more ancient, mysterious, and difficult of comprehension.

A bas-relief of the second dynasty bears an inscription dedicating to the shade of a certain priest "thousands of loaves of bread, thousands of jugs of ale," and so forth, so common in later times. We thus see that 3000 years B.C. it was regarded as a religious duty to provide offerings for the dead, and there seems to be good evidence that it had become fixed and ritualistic by this period.

A few centuries later, about the time of Seneferu, (modern estimate: 2613-2589 BC), the cult of the dead had expanded greatly from the architectural point of view, and larger and more imposing cenotaphs were provided. Victorious wars had brought much wealth to Egypt, and its inhabitants were better able to meet the very considerable expenditure entailed upon them by the most expensive cult known to the history of religion.

In the reign of Pharaoh Men-kau-Ra (modern estimate: 2532-2503 BC) a version of certain parts of the text of the Book of the Dead has been found. We do not find a text comprising the Book of the Dead as a whole until the reign of Unas, (modern estimate: 2375-2345 BC), whose pyramid was opened in 1881 by Sir G. Maspero. The stone walls were covered with texts extremely difficult of decipherment, because of their archaic character and spelling, among them were many from the Book of the Dead. Continuing his excavations at Saqqarah, Maspero made his way into the pyramid of Teta, (Teti - modern estimate: 2345-2333 BC), in which he discovered inscriptions, some of which were identical with those in the pyramid of Unas. So the existence of a fully formed Book of the Dead by the time of the first king of the sixth dynasty is certain. Its texts continued to be copied and employed until the second century of the Christian era.

It would appear that each chapter of the Book of the Dead had an independent origin, their inclusion and adoption into the body of the work were spread over many centuries. It is possible that some of the texts reflect changes in theological opinion, but each chapter stands by itself. It would seem, however, that there was a traditional order in the sequence of the chapters in later times. 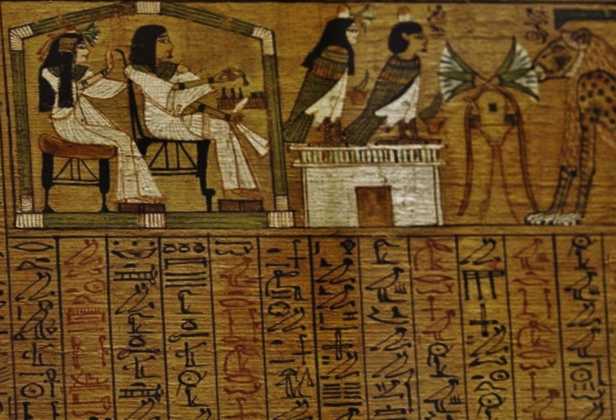 Papyrus of Ani, from the British Museum.
Photograph of the original document by Nic McPhee.

There were three recensions or versions of the Book of the Dead -- the Heliopolitan, the Theban, and the Saite. The Heliopolitan Recension was edited by the priests of the College of Anu, or On, known to the Greeks as Heliopolis, and was based upon sources not now known. The texts found within the Pyramids of Unas, Teta, and Pepi represent the theological system introduced by the priests of Ra. The essentials of the primitive Egyptian religion are, however, retained, the only modification in them being the introduction of the solar doctrine of Ra. In later times the priesthood of Ra were forced to acknowledge the supremacy of Osiris, and this theological defeat is visible in the more modern texts. Between the sixth and eleventh dynasties the priests of On added a number of fresh chapters from time to time.

The Thebes Recension was much in vogue from the eighteenth to the twenty-second dynasties, and was usually written upon papyri and painted upon coffins in hieroglyphs. Each chapter was preserved distinct from the others.

The Saite Recension was definitely arranged at some date prior to the twenty-sixth dynasty, and is written upon coffins and papyri in hieratic and demotic script. It continued to be employed to the end of the Ptolemaic period.

The Book of the Dead was for a person's use from the moment when they found themselves inhabitants of the other world. Magic was the very mainspring of existence in that sphere, and a spirit was helpless unless acquainted with the formula which compelled the respect of the various gods and demons, and even of inanimate objects. The Egyptians called the region to which the dead departed the Duat. They believed it to be formed of the body of Osiris. It was regarded as dark and gloomy, containing pits of fire and dreadful monsters which circled the earth, and was in its turn, bounded by a river and a lofty chain of mountains. The part of it that was nearest to Egypt was regarded as mingled desert and forest, through which the soul of the deceased might struggle unless guided by some benevolent spirit who knew the paths. Thick darkness covered everything, and the hideous inhabitants of the place practised all sorts of hostility to the newcomer, unless by the use of words of power he could prove his superiority over them.

But there was one delectable part in this horrid region--the Sekhet Hetepet, the Elysian Fields which contained the Sekhet Aaru, or the Field of Reeds, where dwelt the god Osiris and his company. We find also a god of the Duat named Duati, but who appears to have been more a personification of the region than anything else. Now the wish of all good men was to win to the kingdom of Osiris, and to that end they made an exhaustive study of the prayers and ritual of the Book of the Dead, in order that they might the more easily penetrate to the region of bliss. This they might reach by two ways--by land and by water. The path by water was equally dreadful to that by land, the passage of the soul being barred by streams of fire and boiling water, and the banks of the rivers were populous with evil spirits.

NEXT CHAPTER
Excerpted and edited from
The Wisdom of the Egyptians
by Brian Brown, published in 1923.

The Papyrus of Ani, British Museum.
Photo by Soutekh67, CreativeCommons.

Part 2
Selections From
The Egyptian Book Of The Dead