The Pharaohs of Ancient Egypt
King List and Timeline,
Part 2

For pharaohs before the New Kingdom,
1550 BC and earlier see:
Pharaoh List Page 1

The New Kingdom is the period covering the Eighteenth, Nineteenth, and Twentieth dynasties of Egypt, from the 16th century BC to the 11th century BC.

The New Kingdom began with the expulsion of the Hyksos (Hykdod) who had invaded Northern Egypt. A succession of Pharaohs enlarged the country, eventually pushing Egypt's borders to their greatest territorial extent. New Kingdom Pharaohs ruled far into Nubia in the south, Libya in the west, and held wide territories in the Near East. Egyptian armies fought with Hittite armies for control of modern-day Syria. Most New Kingdom Pharaohs ruled from Thebes and were buried in the Valley of the Kings.

The Third Intermediate Period marked the end of the New Kingdom after the collapse of the Egyptian empire. A number of dynasties of Libyan origin ruled, giving this period its alternative name of the Libyan Period.

High Priests of Amun at Thebes

While not regarded as a dynasty per se, the High Priests of Amun at Thebes were nevertheless of such power and influence that they were effectively the rulers of Upper Egypt from 1080 to 945 BC.

The Twenty-first Dynasty was based at Tanis and was a relatively weak group. Theoretically, they were rulers of all Egypt, but in practice their influence was limited to Lower (North) Egypt. They ruled from 1069 to 945 BC

The pharaohs of the Twenty-second Dynasty were Libyans, ruling from around 945 to 720 BC:

The Twenty-third Dynasty was a local group, again of Libyan origin, based at Leontopolis, that ruled from 836 to 720 BC: Other lines of rulers controlled Thebes (at times), Hermopopolis, Herakleopolis and Tanis.

Not reckoned a dynasty as such, the Libu were yet another group of western nomads (Libyans) who occupied the western Delta from 805 to 732 BC.

The Twenty-fourth Dynasty was a short-lived rival dynasty located in the western Delta (Sais, known as Zau to the Egyptians), with only two Pharaohs ruling from 732 to 720 BC.

The Late Period runs from 732 BC until Egypt became a province of Rome in 30 BC, and includes periods of rule by Nubians, Persians, and Macedonians.

Nubians (Often called Ethiopians, they were centered in modern Sudan) invaded Egypt in 732 BC and took the throne, establishing the Twenty-fifth Dynasty which ruled until 656 BC.

The Ethiopians were ultimately driven back into Nubia, where they established a kingdom at Napata (656-590 BC), and, later, at Meroë (590 BC-4th cent. AD). There is speculation that priestly secret knowledge was obtained by the Ethiopians while they ruled Egypt, then transmitted to the present-day Dogon of West Africa and to the Olmec of America.

Egypt was conquered by the Persian Empire in 525 BC and controled by the Persians until 404 BC. The Achaemenid Shahs were acknowledged as pharaohs in this era, forming a "Twenty-seventh" Dynasty:

The Twenty-eighth Dynasty lasted only 6 years, from 404 to 398 BC, with one Pharaoh:

The Thirtieth Dynasty ruled from 380 BC until Egypt again came under Persian rule in 343 BC:

Egypt again came under the control of the Achaemenid Persians. After the practice of Manetho, the Persian rulers from 343 to 332 BC are designated as the Thirty-first Dynasty:

The Macedonians under Alexander the Great ushered in the Hellenistic (Greek) period with his conquest of Persia and Egypt. The Argeads ruled from 332 to 309 BC:

The second Hellenistic dynasty, the Ptolemies ruled Egypt from 305 BC until Egypt became a province of Rome in 30 BC Some pharohs ruled together as a co-regency. These rulers were Greeks, more concerned with power struggles than with good governance. They were in frequent conflict over the throne, often within the same family. One would imagine the people of Egypt wished to return to the days of Divine Pharaohs, whose legitimacy was rarely challenged.

Egypt became a province of Rome under Augustus Caesar in 30 BC. Subsequent Roman Emperors were accorded the title of Pharaoh, although exclusively in Egypt. Temples and tombs continued more or less in the Egyptian style until the Christian era.

The above text is adapted from Wikipedia.org with numerous edits and additions. 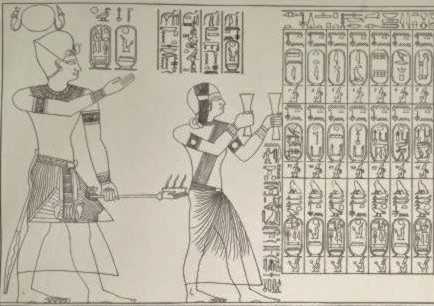 The Kinglist at Abydos.
Seti I and his son, soon to be Ramesses II, present incense
to a list of the cartouches of the Pharaohs of Egypt.
Found in Seti's Temple in Abydos,
on the walls of the hallway leading to the Osirion,
it is a rare source for this information.
Politically incorrect pharaohs such as Akhenaten,
Tutankhamen and Hatshepsut were omitted.
by Johannes Duemichen 1889