The Temple at Medinet Habu

Medinet Habu (Abu, Abou) looks as much a fort as a temple, and it has served that purpose at times. It also has been a Christian Church. But it was built as a temple and palace by Ramesses III, much as his predecessors, Ramesses II and Seti I had built nearby. Medinet Habu is located across the Nile from Luxor, ancient Thebes, at the time the world's largest city.

The complex is 500 feet long (150 m) and is mostly well preserved. It is a popular stop for tourists, but there is a lack of creativity here. 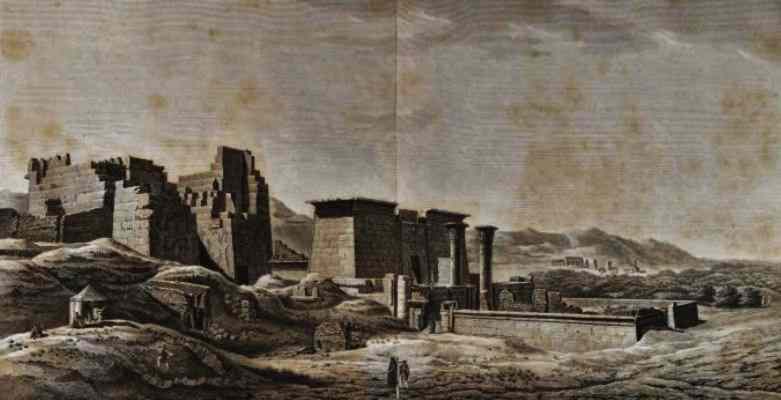 Excerpted from The Spell of Egypt
by Robert Hichens,
published 1911, The Century Co., New York.
Etext prepared by Dagny and John Bickers.

At the entrance to the temple of Medinet-Abu, near the small groups of palms and the few brown houses, often have I turned and looked back across the plain. From here you see the patient backs and right sides of the Colossi, the far-off, dreamy mountains beyond Karnak and the Nile. And again, when I have entered and walked a little distance, I have looked back at the almost magical picture framed in the doorway. At the bottom of the picture a layer of brown earth, then a strip of sharp green--the cultivated ground--then a blur of pale yellow, then a darkness of trees, and just the hint of a hill far, very far away. 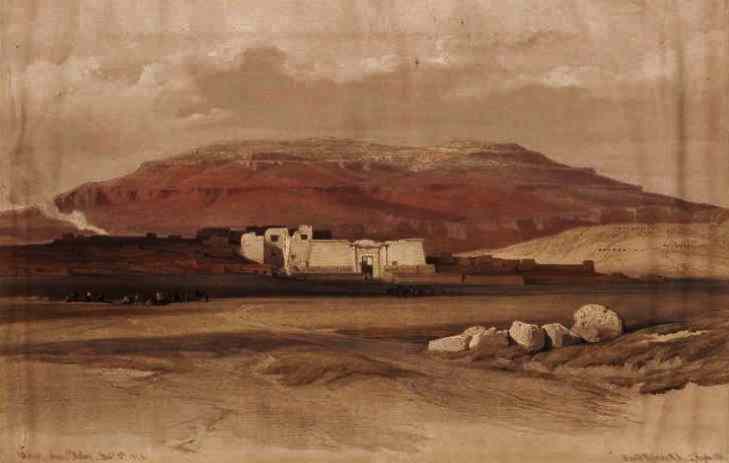 The doorways of the temples of Egypt are very noble, and nowhere have I been more struck by their nobility than in Medinet-Abu. They stand set in huge walls of massive masonry, which rise slightly above them on each side. In their simplicity they look extraordinarily classical, in their sobriety mysterious, and in their great solidity quite wonderfully elegant. These strange portals always suggest to me that they are giving access to courts and chambers which still, even in our times, are dedicated to secret cults --to the cults of Hathor, and of Osiris.

Close to the right of the front of Medinet-Abu there are trees covered with yellow flowers, beyond are fields of grain. Behind the temple the mountains radiate a sterility which makes one think of metal. A great calm enfolds the place. The buildings are of the same color as the Colossi. When I speak of the buildings, I include the great temple, the pavilion of Rameses III, and the little temple, which together may be said to form Medinet-Abu. Whereas the temple of Luxor seems to open its arms to life, and the great fascination of the Ramesseum comes partly from its invasion by every traveling air and sun-ray, its openness and freedom, Medinet-Abu impresses by its colossal air of secrecy. Its walls are immensely thick and are covered with figures the same color as the walls, some of them very tall. Thick-set, massive, heavy, almost warlike it is. Two seated statues within, statues with animals' faces, steel-colored, or perhaps a little darker than that, look like savage warders ready to repel intrusion. 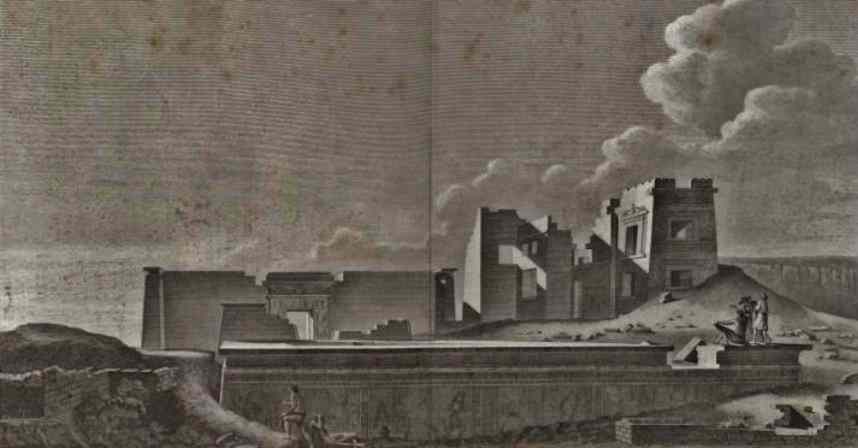 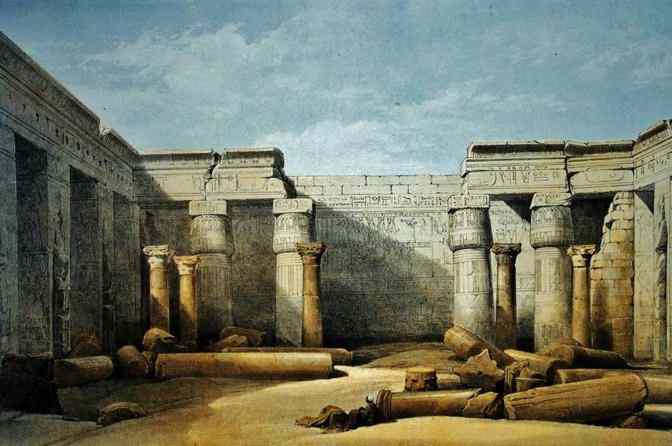 The Courtyard of Medinet Habu
The smaller brown columns are remnants
of a Christian church that was built here.
Those dischordant columns were removed in the late 19th century.
by David Roberts, 1839

Passing silently between them one enters an open space with ruins, upon the right of which is a low, small grey temple covered with inscriptions, which looks almost bowed under its tremendous weight of years. From this dignified, though tiny, veteran there comes a perpetual sound of birds. The birds in Egypt have no reverence for age. Never have I seen them more restless or more impertinent than in the immemorial ruins of the ancient land.

Beyond is an enormous portal, on the lofty ceiling of which still linger traces of faded red and blue, which gives access to a great hall with rows of mighty columns, those on the left hand round, those on the right square, and almost terribly massive. There is in these no grace, as in the giant lotus columns of Karnak. Prodigious, heavy, barbaric, they are like a hymn in stone to Strength.

And still another great hall, with more gigantic columns, lies in the sun beyond, and a doorway through which seems to stare fiercely at the edge of a hard and fiery mountain. Although roofed by the sky, there is something oppressive here, an imprisoned feeling comes over one. I could never be fond of Medinet-Abu, as I am fond of Luxor, of parts of Karnak, of the whole of delicious, poetical Philae. The big pylons, with their great walls sloping inward, the brutal columns, the huge and almost savage scale of everything, always remind me of the violence in men. 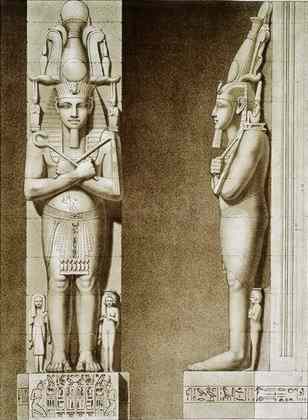 And yet in Medinet-Abu there reigns a splendid calm--a calm that sometimes seems massive, resistant, as the columns and the walls. Peace is certainly inclosed by the stones that call up thoughts of war, as if their purpose had been achieved many centuries ago, and they were quit of enemies for ever. Rameses III built most of Medinet-Abu. He was one of the greatest of the Egyptian kings. He ruled for thirty-one years, and when, after a first visit to Medinet- Abu, I looked into his records, I was interested to find that his conquests and his wars had a character essentially defensive. This defensive spirit is incarnated in the stones of these ruins. One reads in them something of the soul of this king who lived twelve hundred years before Christ, and who desired in remembrance of his victories to give to his memorial temple an outward military aspect. 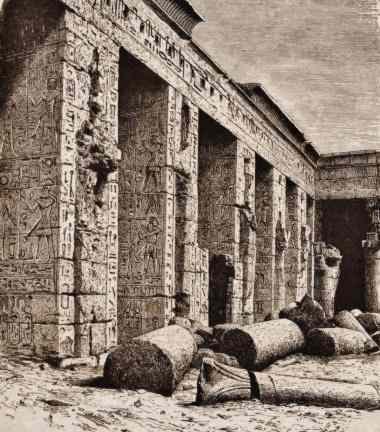 I noticed a military aspect at once inside this temple, but if you circle the buildings outside it is more unmistakable. The east front has a battlemented wall, and the battlements are shield-shaped. This fortress is called the "Pavilion of Rameses III" and his principal battles are represented upon its walls. The monarch does not hesitate to speak of himself, suggesting that he was like the god Mentu, who was the Egyptian war god, and whose cult at Thebes was at one period more important even than the cult of Amun. "I, Rameses the King," he murmurs, "behaved as a hero who knows his worth."

In his later years the king lived in peace and luxury, surrounded by a vicious and intriguing court, haunted by magicians and mystery-mongers. Dealers in magic may still be found on the other side of the river in Luxor.

Re-Creation of the Entrance to Medinet Habu
from La Description de l'Egypte, 1809

Its warlike aspect gives a special personality to Medinet-Abu. The shield-shaped battlements; the courtyards, with their brutal columns, narrowing as they recede towards the mountains; the heavy gateways, with superimposed chambers, the towers, quadrangular bastion to protect, inclined basement to resist the attacks of sappers and cause projectiles to rebound--all these things contribute to this very definite effect.

I have heard travelers on the Nile speak piteously of the confusion wakened in their minds by a hurried survey of so many temples, statues, monuments, and tombs. But if one stays long enough this confusion fades away, and one differentiates between the antique personalities of Ancient Egypt almost as easily as one differentiates between the personalities of one's friends. Among these personalities Medinet-Abu is the warrior, standing like Mentu, with the solar disk, and the two plumes erect above his head of a bull. Firmly planted at the foot of the Theban mountains he stands ready to repel all enemies, to beat back all assaults, strong and determined, powerful and brutally serene.
Excerpted from The Spell of Egypt
by Robert Hichens, published 1911.
NEXT CHAPTER 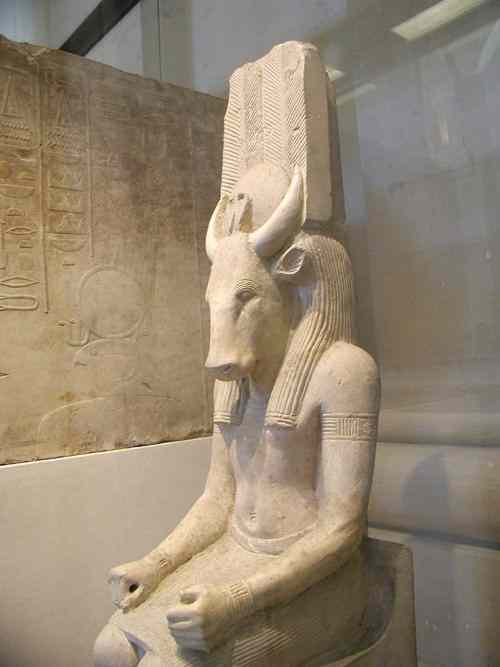 Each man thinks his own horizon is the limit of the world.
Isha Schwaller "Her-Bak"

Pharaoh Ramesses III built a temple
on the opposite side of the Nile at Karnak,
to the war god
Khonsu.